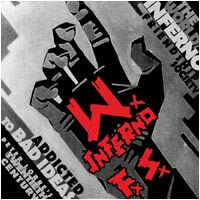 The Dark cabaret was one on of those blip on the radar musical movements of the last decade or so. Mostly it's mix of cabaret, rock and punk. World Inferno's Addicted to Bad Ideas is one of the great albums of that genre. It's a suite of songs about the great Peter Lorre with repeating musical motifs via different musical genres, mush like the theme from Altman's Long Good Bye. It's a fresh, energetic mix that hold together well and with titles like "M" is for Morphine, Everybody Comes to Rick's, Addicted to Bad Ideas and Heart Attack '64 there is a intrigue promise to the album that I can't deny. There is also an element of the kind of show tune sound that we have heard more recently due to the show glee, and I have to point out the Jim Steinman, sound that more than a few of the songs incorporate, which I do dig. Addicted to Bad Ideas in particular could have been (and maybe should be) a great Meatloaf single. I picked this album up after seeing that amazing German 30s impressionistic cover, but I had heard of the band, and heard good things about them.

The band followed up with the album The Anarchy and the Ecstasy which was released a couple of months ago and I am still in the process of decoding and engaging with it.
You can find the band on-line HERE
More Final Thursday Forgotten Music at Scott Parker's Blog HERE
Posted by Iren at 1:49 AM

I can swing with this. Shall seek it out! Thanks.