Decline of the Western Civilization Part III: The Big 4 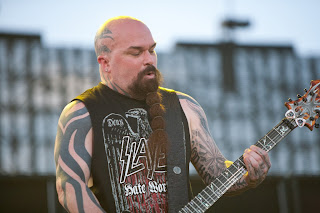 I have known Ryan since we met on the playground, he was in the second grade I was in the third. He's a big music fan and been on board with the music, films and books that have informed my life.

Decline of the Western Civilization Part III: The Big 4

Marking the first ever North American collaboration between these titan of thrash metal (Europeans have enjoyed a number of summer festivals featuring this line-up), this is also the only show scheduled (to date) in North American. This happening has been hallowed as a must-see, a one-of-a-kind event for Metal-Heads of all vintages and creeds. And the Big 4 did not disappoint, from start to finish, the ferocious seven hour onslaught of pulverizing metal brought unrelenting joy to many a head-banger.

Though all of the bands are missing at least one member from their formative days (each band now having been in business for the more than a quarter century), they were all in top form, belting out a bevy of trash metal's Golden Hits.

It warmed my heart to hear Joey Belladonna's soaring vocals anchored by Scott Ian's crunching rhythm guitar on such blistering classics and Among the Living and Cry for the Indians.

Dave Mustaine's trademark rasp was potent as ever while ranting: "What do you mean I ain't kind, I'm just not your kind..." on the Megadethclassic Peace Sells, But Who's Buying?

Waiting in line to take my turn in a port-a-potty, I watched in awe as the crowd began sprinting from the make-shift rest area toward the stage in a demonic cattle call, as the opening chords of South of Heaven rang out, announcing Slayer's arrival. And who could blame them?

But with such a hefty offering of hor d'oeuvres (more of a meal than most could consume in one sitting), what entree could possibly be appropriate for such an auspicious occasion? In a flash of blazing pyrotechnics, elaborate strobe lights and a three screen backdrop, Metallica answered that question with the crushing fury of For Whom the Bell Tolls, and proceeded to absolutely ravage the crowd, tightening their metallic death-grip with each successive sonic assault. 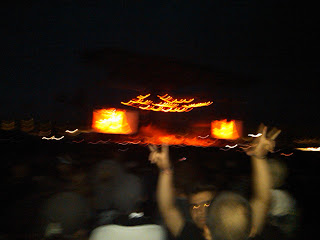 In short, the musical performances can be described as nothing less the spectacular: two thumbs up, 10 out of 10, five stars, and on and on...

The real star of the show, however, was the crowd. As I mentioned above, most of these bands began their careers more than 25 years ago, and experienced their heyday somewhere between 1985 and 1992. Yet, still going strong these metal stalwarts attracted an estimated 50,000 concert-goers.

So who are these vast and dedicated faithful? A fascinating breed all their own. During the show, I derived as much joy from people watching, as I did from the musical performances. I commented to a friend in attendance with me, that we were awash in the sea of humanity, or more specifically, gliding along the underbelly of the sea of humanity. With a range of ages spanning from late teens to early fifties, several generations of metal-heads were represented, many looking as grizzled, intimidating and downright scary as ever - and I loved it!

Misfits, miscreants and mutants from all walks of life letting their metal flag fly to a soundtrack of the genres elder statesmen and greatest performers. How could anyone resist the undiluted purity fueling their belief... the belief in the power of metal - in its power to overcome, and defy the injustices mainstream society continually foists upon all nonconformists.

A Desert Storm veteran missing both legs, enjoyed the show in state of elation, providing a particularity moving portrait of metal’s power to overcome and unite. How good are the odds that this young man took to the field of battle in Iraq to the strains of Slayer and Metallica?

Plus the, the wardrobe was way-cool! Not much leather (damn desert heat), but tons of denim and spikes, long hair, short hair, Mohawks, chicks with sunburns in bikini tops, and the tee-shirts... oh yes, the tee-shirts... Nowhere else in the world would you find more people clad in black tee-shirts, thumbing their noses at the 80+ degree weather - scorching desert heat be damned!

The tee-shirts were definitely the subliminal hit of the show. Every vintage of metal tee-shit you can imagine, with more classic Metal up Your Ass Metallic tee-shirts than you could ever hope to find in one spot. Other highlights include a tee-shirt with Slayer transcribed in Arabic, and my particular favorite; an enormous bald man sporting a Cal-Trans orange tee-shirt embolden with the phrase: "ever ride a fat boy?" In a word... classic.

In total, the event was absolutely fantastic! The good metal vibes and heavy tunes have, weeks later, continued to reverberate through my head. Fun, sun, copious amounts of alcohol, the kings of thrash metal, tons of cool metal gear and 50,000 raging metal-heads - this may be the description of the best time anyone could possibly have on planet earth. If you have the opportunity to partake of the Big 4 experience, I highly recommend you do so.