FFB: Let It Be by Colin Meloy 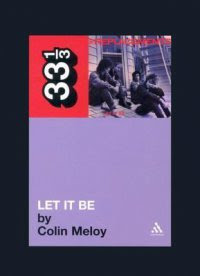 This weeks Friday’s Forgotten Book is the 16th entry in the33 1/3 Series of books, which reflects on the album Let it Be by The Replacements

I first heard of The Replacements in High School, when my locker mate and writing sparing partner Shawn Dykehouse thrust and article for the Communicator (our weekly high school news paper) and told me to sign it. He wanted a co-author for an, and to help me with a little needed credit. I don’t recall anything about the article other than it praised The Replacements as the best band of the ending decade. In college I had a TA who was teaching some ridiculous integrated general ED class that I got friendly with, we were on the same wave length somehow, and I recall him telling me about The ‘Mat’s as he called them, still I didn’t bite… it was only later, when I was residing in their home town of Minneapolis –Saint Paul that I got hip.

It was Bastards of Young, it was Left of the Dial, and then it was I will Dare. All of this is to say that of the half dozen or so installments of the 33 1/3 series that I have read so far this one has been the most engaging, the most enlighten, and the best. It’s that Colin Meloy (yes of the Decembrists) hits home for me, a couple of years younger than me, he writes of a time that was part of my youth, part of my reality. He hits the teenage themes that I knew, he talks about books that I read, and a world that I knew, and he doesn’t let some lengthy catalog of recording sessions and time spent writing songs fill his pages. Instead he talks about how it related to him, at the time that it did.

He ends the book talking about his first visit to the 400 Bar in Saint Paul, in May of 2003 and seeing all the ‘Mat’s stuff on the wall. That was only months after my first visit to the same place, November of 2002, the first week in town, my brother and I staying at an extended stay looking for a place to live so that we could go out and find work. The Swedish group The Soundtrack of Our Lives played the 400 Bar and we dutifully went to check them out. I don’t recall the photos on the wall, only that TSTOOLs were awesome and that I met a girl, her name now long forgotten, who I never saw again, but left me feeling like MSP was going to be a good place to be… and it was for a while…. As was the trip down memory lane that is Let It Be.

I've never read any of these 33 1/3 books, but this might be the one that I start with. Love The Replacements, and Let It Be is a great album (as is Tim, Sorry Ma I forgot to take out the trash, and most of their other stuff).

Cullen: It was great, and having read a couple of others in the series, most of which have been pretty good. I did send in a proposal to write one a couple years ago during an open call. You can read it at: