This will be on the test 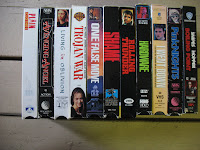 11 VHS tapes (most of which are not on DVD.... as far as I know) that I picked up for $2 each. Some that I saw back in the day, some that I have heard of and some that just looked like they were worth checking out 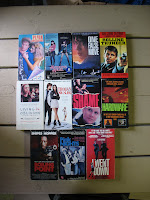 Destroy All Movies!!! The Complete Guide to Punks on Film I've often told people that the 2 films that changed my life were Dudes and then Return of the Living Dead... both featuring punks. The first is a punk western and the second of course is thee Punk horror flick. So naturally I am lusting after:
Destroy All Movies!!! The Complete Guide to Punks on Film Edited by Bryan Connolly and Zack Carlson
they have a web page and blog HERE
Posted by Iren at 11:20 AM No comments: 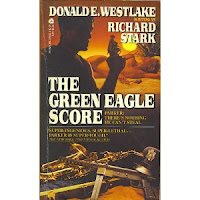 As has been noted by many Friday Forgotten Book posts in the past, Richard Stark (a.k.a. Donald Westlake) is hardly forgotten.... at least by us, and assorted comic book fans who are currently discovering the world of Parker via the Darwyn Cooke graphic novel versions of the Parker series. The latest installment The Outfit just hit shelves and while I have my copy I haven't read it yet. I even mentioned Parker in my last FFB post..
Today's book, The Green Eagle Score, isn't even out of print, the copy that I am reading right now is from the The University of Chicago Press reprint series of the Parker books..... but what I am seeing as I read it is the kid. Yep the kid, one of the main characters Ellen has a 3 year old daughter who plays in the yard while Parker and his crew plan their heist of an Air Force Payroll. What strikes me is the simple question where is she now? The book was written in 1967 and so it's safe to assume it's set during that time period, so now in 2010, that little girl (assuming she has survived) would be pushing 45 years old. What's her story, she as a jail bird heist man father in Parkers crew member Marty, and a mother who seems to keep taking up with guys who have a taste for the life--- so what kind of life did Pam have? what was her world like at 18 years old. 1982 is a year I recall, but I have no clue what it was like for a 18 year old girl. Was she a punk, a criminal, a druggie? did she end up with some weird cult or a disco queen? I don't know, but it's one of those loose ends that will have me up all night thinking about the possibilities. Is she Parker from the show Leverage... or Parker's mother?

I know, I know, it's just a crime story. One of the Stark books with the Plotting and the heist and all of the Parker being Parker, but also being psycho-analysed by proxy. That's right a head shrinker is hearing about Parker and the wheels are turning, as I am sure from the point of view of a Shrink, Parker has to be a hell of a lot more interesting than a bunch of house wives and spoiled kids.
At this point I have to point out that as I type this I am 92 pages into the 173 page book and the well, thing that's going down.... I saw it coming-- but I am along for the ride, it's a Parker novel, I have yet to find one that isn't worth the ride, that isn't worth seeing how it all plays out.
Anyway, it's not one of those Parker books that people talk about as being their favorites, or a turning point for the Stark storytelling or anything like that. What I can say is that it's solid, and it's sparked my interest in the long term story or Parker and his crew. Where do these guys end up? What and who are they in 2010 and what have they left in their wake?
Since writing the first draft of this post I have finished the book, and it's good to see that Pam survived (not that I am going to get into the rest of the stories payoff...) and I am still wondering where is she now? And not just her, where are the rest of the characters that Parker came into contact with back in the day, the kids, the women, the motel clerks and the weirdo's who sold him guns and put up the money for the heists??? The truth has a way of coming out--- often enough, I am thinking there had to be one of those Unsolved Mystery segments from the 1980s that were looking for a man known only as Parker.
You can find all kinds of Parker stuff over at The Violent World of Parker
More Forgotten Friday Books over at Patti Abbott's blog
Also of note is the SFF Audio podcast episode 082 which features a discussion of the Westlake book Memory.
Posted by Iren at 10:18 PM 1 comment:

Recently I have been tripping through the undiscovered [by me at least] past. Inspired by blogs like House of Self-Indulgence, Podcasts like The Gentlemen’s Guide to Midnight Cinema, The books of Hard Case Crime and a pile of punk rock and oi! Reissues I think that I am set for a while in feeding my information addiction.

All this is the say that this weeks forgotten Friday book isn’t a older book, but, well a new book that is a collection of stuff from the past.

When I was a student back in the mid 90s at Michigan State University I hung out at a local pop culture emporium, Gen X where I bought comic books, graphic novels and magazines. I also rented videos and generally chatted with the staff about music, films and all that stuff. One of the magazines that I got in the habit of picking up was Cashier’s Du Cinemart, a somehow Michigan zine related mainly to film. I picked up issues here and there; they used to occupy shelf space with my long gone collection of Psychotronic and Shock Cinema collection. At some point I either stopped buying them or I stopped seeing them. I think it's most likely that when I left E. Lansing I no longer had a place to buy them. Somewhere along the line they seemed to all vanish; I am going to blame the purge of 2002 for that.

Anyway, the recently released Impossibly Funky: A Cashiers Du Cinemart Collection appealed to me, but not because I wanted to relive the face off between CDC main man Mike White and Quinten Tarantino about the whole City on Fire/ Reservoir Dogs thing. It was a reviewer (whom-- I don't recall) that noted there were articles about film adaptations of the works of: David Goodis, Charles Willeford, James Ellroy and the attempts to bring John D MacDonald’s Travis Magee to the screen. There was also an article called The Four and a Half Worlds of Parker, about the film Payback and the history of Richard Stark’s (Donald Westlake for those not in the know) most enduring creation in film. All of those names are of course FFB gold.

One of the magazines that I still pick up these days it the music obsessive’s dream, Ugly Things, with its yearly OD of info. There were years when I would have a headache from the overload in it’s pages and as I looked at Impossibly Funky I have a feeling that it’s going to leave my brain exploded and my body in the fetal position as I recover from the ingestion of the information, opinions and thoughts contained with in.

Edited: cause my last draft just didn't cut it.

I recently saw this title on a list of feminist books and was reminded how good it is. It's a very readable academic work exploring gender roles in what at the time were modern horror.
The story, as I recall it, is that the author Carol J. Clover was challenged to watch The Texas Chainsaw Massacre. She has assumed that horror was about the dehumanization and destruction of women for the entertainment of mostly teenage boys. In stead what she found was that the survivor's of horror films tended to be what she dubbed the final girl.
Expanding on her essay on the Slasher films that had been popular during the 80s, she then added chapters on the Rape Revenge Films of the late 70s and Early 80s and a chapter on Occult/ Possession films of the same era. I found the second chapter as interesting as the first, but the last one kind of fell flat when I read it.
What is interesting about the book is that it was read widely by horror fans, and it changed the way horror films were viewed by many non-fans.
More Friday Forgotten Books HERE
Posted by Iren at 1:34 PM No comments: