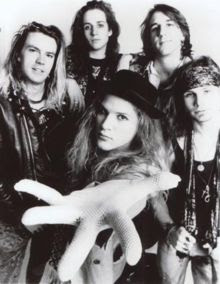 I couple of years back I was in line at the prize table at a pub trivia night, the guy in front of me turned to me and said something about 'it figures it would be a bunch of old guys that knew that one'. He was talking about the album Temple of the Dog (which sold a lot of copies in 1992) and the question of who was it a tribute to... the answer for those of us in the know was of course Andrew Wood the lead singer of
Mother Love Bone who had died of a heroin OD in the spring of '90 missing his shot at the big time by and year and a half.

From Wiki:
Mother Love Bone was an American rock band that formed in Seattle, Washington in 1988. The band was active from 1988 to 1990. Frontman Andrew Wood's personality and compositions helped to catapult the group to the top of the burgeoning late 1980s/early 1990s Seattle music scene. Wood died only days before the scheduled release of the band's debut album, Apple, thus ending the group's hopes of success. The album was finally released a few months later. Although Mother Love Bone is to this day remembered by many as a very talented band in its own right, its legacy, for , some, is overshadowed by Wood's death and the bands that its former members would later form.

What I dig about MLB and their music was the pure glammy joy of so much of it. Sure if you listen to it you can hear what would become known as grunge, but it was so much more. Wood was a fan of punk, metal and underground music just like many of his peers, but his love of: Bowie, T. Rex and Slade added that note of Glam and fun to his music. He also had a more introspective side, songs like Bone China and Man of Golden Words are accomplished works that would have been worthy of a Ben Folds. Mother Love Bone did get their moment, and I am willing to bet that many a copy of the selftitled 2 disc retrospective are waiting to be found in discount bins across the country. 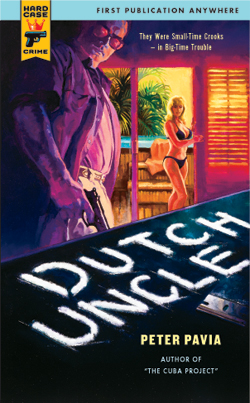 yeah, it’s been a while, almost a whole month since my last post and I don’t know how long since my last Friday Forgotten book--- but I am back with a new entry, my Hard Case Crime book for this month, Dutch Uncle by Peter Pavia from 2005.

Three days out of prison and trying to stay clean, Harry Healy doesn’t really want to get involved with Manfred Pfiser’s drug deals. But he needs the cash—so he agrees to make one simple delivery.
Simple, that is, till Harry stumbles across the results of a robbery cooked up by an old cellmate of his, together with a former high school baseball star, a trigger-happy sociopath, and a beach bunny who can’t seem to keep her clothing on.
Now they’re all on the run—from the cops, from the drug lords, and from each other...


What I really liked about this book was two things, the dispersed nature of the narrative. We followed not only Harry, but the Cops and the other people involved in the murder through their stories. It was like three short stories that all interconnected and gave a more complete view of the crime, what lead up to the crime and how it affected those involved. In that way it was more than just a simple caper story.

I also liked the flow, Pavia never got bogged down with extraneous junk, he kept the story rolling along, but gave us enough of the characters inner lives to fill them out just enough. I haven’t read any of Pavia’s other work, but he is a author who I will be on the look out for.

I plan to be back next week for a new thing that I am trying out, a FFB Echo review, where I am going to write about a book that I picked up because of someone else’s FFB.

thoughts, comments, spare change-- forget the change, use it to pick up some Hard Case Crime or Stark House books.

For fairly obvious reasons (see my last post) I really didn’t finish many books this month. I managed to get through my planned one Hard Case Crime and my one John D MacDonald, along with a single Donald Westlake novel.

Nobody's Angel, the latest from Hard Case tells about the life of windy city hack Eddie Miles, and mostly follows his shifts behind the wheel. He goes from fare to fare to fare and wonders about the rest of his life. It’s a brisk, speedy read and I really like that is just a look into the world of a big city hack.

The Quick Red Fox was an challenging read, mostly that I was making my way though it as my mother was dying and everything around that was happening. It’s a product of it’s time and almost seems silly in this era of celebrity sex tapes (yawn). The plot is simple Travis McGee is hired to aid a fictitious Hollywood star named Lysa Dean who is being blackmailed with revealing photographs. Over all it was solid, but the end felt a bit rushed and I found it hard to follow exactly what was going on during the last 20 or so pages. That very well might have been more about my state of mind than the book, but there were thing that I had to reread a couple of time to figure out and still wasn’t getting the whole picture. Next months MacDonald is going to be one of his stand alone books, and I am thinking of one of the later books like; Condominium, One More Sunday, or Barrier Island might be next.

Murder Among Children by Tucker Coe (Donald Westlake) was a nice surprise--- and that’s all I am going to say about it for the moment, as I have plans for a whole post about it sometime soon.