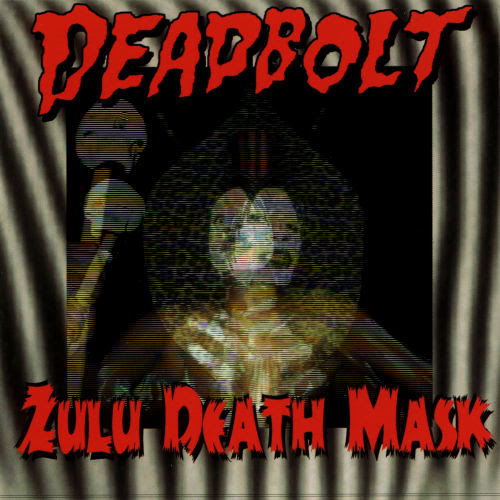 Deadbolt hails from San Deigo, CA and have been playing a dark surfy 50's instrumental brand of rock and roll since the 1990s. They billed themselves as 'The worlds Scariest Band' and it was that tag that encouraged me to check them out. As I recall I picked up their first album, Shrunken Head at FBC in Lansing Michigan during my senior year at MSU. I immediately was drawn into their vibe and despite a need to throw seemingly Novelty songs on their albums I have followed and enjoyed their records.

Zulu Death Mask includes the first appearences of one of their few recurring characters, Patches the Clown. 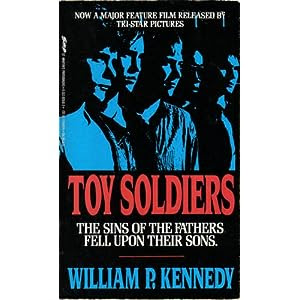 I found this book because of the film, and quickly had to devour it. In those days the moment I knew a film or TV show that I liked was based on a book I had to track down a copy.


The plot concerns a group of terrorists who take over an all boys school to use the boys to get their politically and
industrially powerful fathers to pressure the US Government into give in to their demands.

So you have your basic Die Hard in elite boys school set up. Of course there is a kid who is just enough of a pain in the ass to take on the terrorists and.... well you'll just have to read it to find out what happens.

Honestly I don't recall much of the book, only that rough plot outline and the fact that at the time this book was being written that I had already caught onto the fact that there were terrorist out there and they wished me harm. While my family never had the political clout or money to send me to a elite school (not that they would have wanted to) it was easy for me as a teen to put myself in the shoes of a group of boys facing a threat that was caused by their parents, that their parents were not able to deal with, and think what would I do?

From the vantage point of 2010, I can see the story in a different light living in a post 9/11 and post Columbine world. In 1990 it was considered paranoia to worry about terror acts in schools, today it's not so far fetched.

I might go back and reread this book someday, but I feel more of a need to see the film again.
Posted by Iren at 12:01 AM No comments:

Following Patti's lead, here is what I read in 1991. I was a High School Senior and College freshmand during this year and managed to read a lot. Most of it was, well crap. Anyway on with the show.

Patti's List can be found HERE
Posted by Iren at 3:41 PM 2 comments: 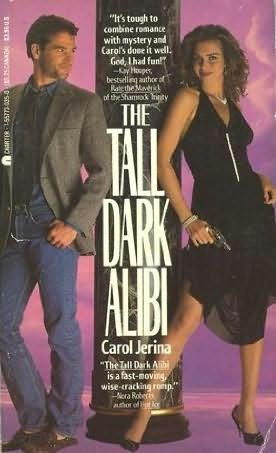 Lo' those many years ago, when as a High School student I would wander to the Community News Center book shop on the corner of Liberty and Division streets, brave the looks of the homeless hanging out at liberty plaza and spend my meager lunch money on paperbacks and gun magazines. I was sticking my toe into the world of crime fiction and flashy covers, and this one caught my eye.

I read it, and I held on to my copy for years, but I don't know that I could tell you really anything more about it. It was simply average and forgettable, a slice of paper that was trying to sell the TV series Moonlighting vibe in a book.

I kept looking for more books by Carol Jerina and none appeared at the Community News Center (which is now long gone of course), and the book, it's story and even the title faded from my mind. Now that I have done a little research it seems she was a romance writer, no wonder none of her other work ended up in the mystery section.

I held on to my copy of The Tall Dark Alibi for years, never reread it, and it went away in the purge of 2002 I think.

George Kelly is hosting this weeks Forgotten Books round up over at his site HERE
Posted by Iren at 9:45 AM No comments:

I managed to get through 5 whole books this past month and, well here's the list.


The Lovecraft Papers is a collection of stories, the first and longest is a kind of mash up of Lovecraft and Conan Doyle, with the later shorter stories being a set P.G. Wodehouse tales by way of Lovecraft. It's good stuff, but I am not sure that I would want a steady diet of it.

Charlie Stella is a name that I have heard and when I heard that Stark House Books was going to publish their first non-reprint I knew I was going to have to check it out. It was a great twisting early 70s low level mob crime tale. I'm not going to get into all the in's and out's let's just say that if you dig 70's crime this should be right up your alley. I really like that it referenced both the book and the film The Friends of Eddie Coyle to which it has a similar feel.

Richard Stark, you can't go wrong there. The Damsel is one of the Grofield books and while it's a little meandering and took a bit to get going, it's another better than average entry in the Stark cannon. The plot is pretty basic, while recovering from the events of The Handle and a Damsel climbs in his window. She needs help, and having drawn Grofield into her drama he has little choice other than to get her out of town and into play. This isn't a heist story, but one of political intrigue, family drama with a bit of road trip/ on the run type stuff thrown in-- most importantly it left me looking forward to the next Parker book The Rare Coin Score (by the way, the newest batch of the the University of Chicago Press reprints hit shelves in the last couple of days)

Grave Descend was my Hard Case Crime selection for the month, and my first Michael Crichton read. It's a breezy, fun adventure set in the Bahamas. I am not sure why, but it left me wanting to see the film The Deep again or maybe it just put me in mind of Jacqueline Bisset (all you pulp fans really need to check her out in Le Magnifique) anyway, it was good, and I look forward to the other Crichton HHC entry Zero Cool.
I
speaking of adventure pulp and Le Magnifique I also read the 3rd book in the Hunt for Adventure series, HUNT AT WORLD’S END. It was ok, I have to honestly say I liked the first two better, but this was an passable adventure. I liked the globe trotting, and the archelogical set up was fine, there was just a few things that didn't jive for me, some little-- there is no safety on a SAA Colt 45 for instance -- and then there were bigger issues like the pacing was a bit herky-jerky for me. For what it was, it was fine, and I am really looking forward to getting into HUNT BEYOND THE FROZEN FIRE as told to Christa Faust.

Barrier Island was the John D book for this month, and it was the last of the books he published. It stands to his knowledge and understanding of low level business crime and his ability to tell a simple story that this book flowed so easily and kept my attention. I had to keep reminding myself that it was set in the mid 80's and not the 50's or 60's, which in hindsight was good as it didn't feel overly dated and littered with then current pop culture, fashion and slang. The cover of my copy announced that it was 13 weeks on the best seller list, I hope that many of those who picked it up in 1986 have gone back and given it another read, maybe someday I will.

that's it for the month-- thoughts, comments, ect.