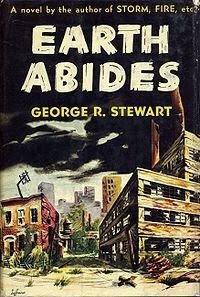 I found Earth Abides because of a stray comment (ok many be not so stray comment) from Stephen King, where he mentioned the Earth Abides as an inspiration for The Stand. It latter came up when I was sitting in a History of the American West Class during my final year of college. We were assigned to read a book about the Donner Party, written by one George R. Stewart, who in addition to being Professor of English at U at Berkley who had written Earth Abides.

The story follows Isherwood "Ish" Williams as he first explores the US after a epidemic wipes out a huge chunk of the population. It’s examination of the end of a civizalition followed by the birth of a new one is a idea that sets well along side HBO shows like Deadwood, The Wire and Boardwalk Empire.

I would say that it's a classic of the post apocalyptic genre and well worth checking out. It's also a book that I really need to re-read as some point,

Todd Mason is hosting this week and next weeks FFB's, you can find him HERE
Posted by Iren at 2:35 AM 1 comment: