I am not going to be writing big long blog posts... but there will be something... this is my Horror/ Cult TBW pile... 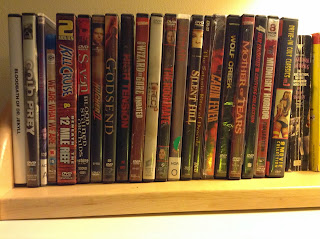 The September 2013 podcasting blitz marches on...

this month has become the guest spot/ host month for podcasts.

I started off with co-hosting The Gentlemens Guide To Midnite Cinema Episode #252: Astronaut Highway

where my buddy Tim and I talked about 2 music related films Human Highway (1982) directed by Dean Stockwell and Neil Young and The American Astronaut (2001) directed by Cory McAbee..

I have also recorded guest spots on The List Music Podcast and Monster Kid Radio…. I am scheduled to appear on Love that Album ep 50 and the 2nd installment of the Cannon Films series from the Film Podcast.