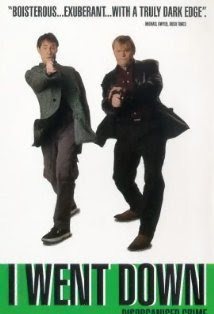 I Went Down is one of those indie crime films from around the world that got some play in the States (which are brilliant apparently) mostly due to an indie film boom, home video, and the commercial, critical and cultural success of Pulp Fiction. It features a cast of faces from the UK, most of whom you might have seen somewhere, but mostly it features the great Brendan Gleeson showing why he could carry a film like In Bruge.

I’m not going to get into the plot to deeply, Git and Bunny (Gleason) are sent to Cork to pick up someone with a packet of money for gangster Tom French. Git and Bunny both owe Tom a debt and he leverages that debt to send them on the errand. Along the way nothing turns out the way it was planned. There are great performances, mostly from Gleeson who has a charm and charisma on film that many actors do not. It is easy to see why he was such a stand out element of In Burge.

Like In Bruge the film at it’s core has theme of betrayal and loss of social connection. There are contrasting betrayals, and in fact both of the debts that Tom French holds over Git and Bunny, are debts that any sane man would have walked away from. For Git it’s that Tom is holding his best friend who has hooked up with Git’s Ex-Girlfriend while Git was locked up. Git’s been betrayed by both his best mate and his woman, and still comes to their rescue, even though both have proven that they don’t deserve it.

Bunny’s wife has left him, and the film makes plain that she’s gone and no longer wants anything to do with him. Yet, Tom French knows something about Bunny that he threatens to tell the MIA wife, and that leverages Bunny’s participation in the goings on. Once again any sane man would have just cut their losses and moved on.

Shot in Ireland, the film shows landscapes, roadways along with Bars and Hotels that you don’t see in film all that often. The accents are a bit thick and that prevents untrained ears from picking up all the banter, which is witty and has a zing like the best indie films of the era. There are a few murky areas of the story that could have and should have been fleshed out a little better, but over all it’s a above average gem from that end of the VHS period. As far as I know it’s not on DVD, but if you run across it I highly recommend checking it out.

Not on Netlix. Darn.

I saw it in London when it came out and liked iy a lot.