While continuing to clean out my mother’s estate I came across this review and felt like I should share it with everyone. My mother grew up in a household where films were of the devil and as a student in the 1950s during lunch on raining days she wasn’t allowed to watch the Shirley Temple short with the rest of the children, nor was she allowed to have the Ice Cream Cup treats that her peers were because photos of film stars were some how involved. She often told my siblings and I that the first film she saw in the theater was The Sound of Music when she was 21. She like a lot of parents was concerned about what we saw on TV and at the movies and often times would not let us watch the same films and TV shows our peers were, but often she let us see films that our peers were not seeing, because they were too mature or parents didn’t think that their kids would like them.
Tender Mercies was on of those films that we were not only allowed to see, but were taken to by our mother because she felt it was important somehow. I recall going to the State Theater in Ann Arbor, and I am sure that it did effect me, but I honestly can’t say what I thought of it at the time.
Having seen it again a little over 4 years ago I did more fully understand the film and found it still had something to say for current audiences. It still resonated with me strongly enough that when I saw the recent Crazy Heart I recognized that film as being tied to Tender Mercies in more than Robert Duvall’s performance… anyway, without further ado my mothers 1987 review of Tender Mercies…
From Cross References the newsletter for University Reformed Church in Ann Arbor Michigan
Originally published in the August 1987 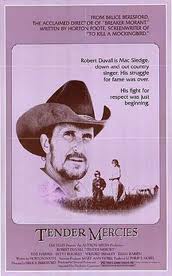 Tender Mercies
A deceptively simple story, Tender Mercies with its stark plot and poetic dialogue has the ability to grab onto your heart. Don and out country singer Mac Sledge (Robert Duvall) fetches up in Rosa Lee (Tess Harper) and her son’s corner of Texas. Rosa Lee, a Vietnam era widow who runs a gas station/ motel in what seems like nowhere. She and Mac Marry, while he reconstructs his life as a singer and rehabilitated alcoholic.
Meanwhile, in nearby Austin, Mac’s ex-wife, Dixie (Betty Buckley of Cats) is singing Mac’s songs and pursuing a successful career. Their teenage daughter languished backstage while mama “belt’s ‘em out.” Dixie is as haunting in her empty lyrics as Mac is in his heartfelt, newfound truths.
The theme, “It Hurts to Face Reality” is a poignant as sung by Duvall. Although there is plan, Mac, Rosa Lee and Sonny never flinch – sometimes you wish they would. Their day to day existence is carried out against sparse furnishings: neat, clean survival living. Unified by their respect for one another and their faith in god the look life in the eye, relentlessly.
The understated dialogue sketches in a richer world than meets the viewer’s eyes. The statement, “I don’t Know,” is a response which is followed by an action to discover the truth or accept the unknowable. When Sonny, Rosa Lee's son, asks how and hen his Daddy died, the three visit the cemetery. Many issues are dealt with directly without the tedium of analysis, accusation or blame.
Robert Duvall is so believable in this role that it seems autobiographical/ He becomes the taciturn Texan, who’s half-smiles and gestures tell the rest of the story. His singing is as pleasant and easy as the songs, some of which he wrote himself.
It would be a mistake to underrate Rosa Lee as the little housewife. She can more than convey more in a glance than any word could. Her singing takes place in the country church choir and she shines where she is.
Sonny has the sagacity of a child touched by tragedy. He also possesses the privilege of the childe of a single parent -- intruding when he senses Rosa Lee and Mac are getting close and addressing them as peers. His joy and chatter enlivens’ their lives.
The photography is another dramatic element. Many statements are mad in the silence. The spaces almost become characters in themselves. This is the Texas most non-Texans will never know – simple, earthy, spacious.
God is not given lip service in this film. When Dixie’s cries out in anguish to Mac, “Why did God do this to me?” he ahs no answer, only compassion in his eyes. There is forgiveness and love, with thankfulness and joys as subtle undercurrents, as Rosa Lee says to Mac, “When I say my prayers at night and thank God for his blessings and tender mercies, you and sonny head the list.  This movie touched my children and me deeply after my husband’s dearth. I think we all agree: it hours and heads) to face reality.
This is a movie which could open up dialogue among families. We shy away from talking about pain and death until it is upon us. This is not he pattern God has given us. We have as Christian people a long history of wrestling with God on the hard ground. Tender Mercies helps us see it again --- PBP
Posted by Iren at 10:53 AM

This is very touching, Eric.

TENDER MERCIES is near the top of my list of all-time favorite films. Your mother's review touches on so much of what is memorable about it. The script is, I believe, by Horton Foote, and for more of his gentle take on the world, small-town and rural people, I'd recommend THE TRIP TO BOUNTIFUL.

Duvall won an Oscar for his performance in the film. Also, the director was Australian, and like other directors from elsewhere in the world (e.g. Ang Lee), he has a feel for Americana that many Americans miss. Thanks.