The Runnin' Kind is one of those great little b films from the 80s that has largely been forgotten. The plot is about a kid from a nice upper class family in Ohio meets the drummer of the band The Screamin' Sirens and kinda falls for her. Instead of staying home and taking the career ladder internship set up by his family he takes off for LA to follow the band. It's a sweet story about a kid who has been controlled all his life by family breaking out and doing something for himself. He opens his mind enough to see that these punks aren't just a bunch of thugs and that there is more to life than just going to work and doing what you are told.

The fashions are pure Cowpunk, mixing Western wear, lingerie, and Punk and Glam clothes of the mid to late 80s, which I kinda like. The music is fairly Cowpunk mixing those sounds in a way that I like... and that I like enough that I own both released albums by the real Screamin' Sirens. 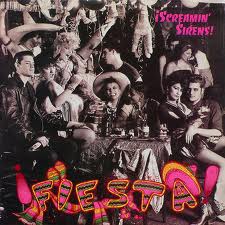 I have a lot of affection for this film, in many way's it reflects parts of my life. I grew up in a proper christian household where there were a lot of expectations about how my life would play out. I ended up falling off that track for various reasons, and one of the places I ended up was in the punk rock world.  I wasn't lucky enough to have a cadre of Cowpunk chicks chasing me, but hey you can't have everything.... but I digress, The Runnin' Kind is one of those films that needs to be rediscovered, sure it's on the slight side, but it never bored me and I think that a lot of people will find a lot to like in it. Of course it's not on DVD, but if I had all the money in the world, it would end up on a 2 in 1 DVD with our next enter Scenes from the Goldmine. I also really want to know what Yum Yum from House of Self-Indulgence Blog would think of this film.
Posted by Iren at 1:14 AM

Yes, you have my sympathy. Though one punk-rock woman did considerably more than make her intentions clear.

I'll have to look into the Sirens...

516Do you know where I can find this movie? I saw half of it years ago and for some reason it really touched me. I've always wanted to see watch the whole thing as a revisitation of a stage of my life?

If you know how I could get a copy let me know at
johnrich68@gmail.com

I don't know where copies can be found these days... the only reason I got to see it is I found a used VHS copy at a local store years ago... I would say check Amazon or ebay would be your best bet...