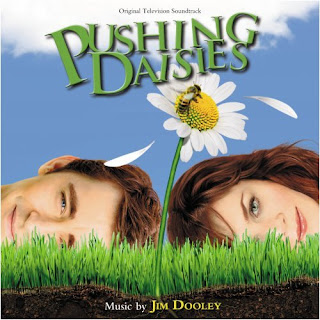 It’s amazing how your mind can play trick on you, I had remembered the music from the late lamented ABC TV Show Pushing Daisies, as being kind of cool, loungy, bright jazz/ exotica. I was thinking real Martin Deny or Les Baxter type stuff. The show was a fun, cartoony looking take on the slight wacky detective formula. The music in the show was great and along with the set design and the off kilter cast of charters add to the fun feel, and I was excited to pick up the sound track…

Only, this turned out to be a case where the score and the music cues didn’t seem to hold up much on their own. There are a few bits, mostly riffing on Big Band, that I do like, but overall the find it all just to be ok…. Or so I thought at first. Having listened to the album several times for this review it really has started to grow on me. And honestly this isn’t the first time that it’s taken more than a handful of listens for something to grow on me.

I wonder how much we have all written off because something didn’t hook us the first time? I like to think that there was a reason we sought out a film, or book or album, and if we don’t immediately get that jolt of pop culture buzz off of it, do we leave it behind? I also tend to think that as culture consumers that things that he have expectations of disappoint us most. If I am sure that something is going to just be ok, and that’s exactly what it is, I tend to shrug it off as, what else did I expect?

I am glad that I have rediscovered this album and it will serve to remind me that I need to go back and give another listen to anything that I was really disappointed by. Anyway, I haven’t yet mentioned the three Glee like production numbers (Moring has Broken, Hopelessly Devoted and Birdhouse in you Soul) sung by cast members, all of which are first rate. I think this would be great for the mini van on the way to or from school, or just stuck in traffic on the way to or from the office.

Next time: Hiding Out the original film soundtrack

I enjoyed the show Pushing Daisies when it was on. It was quirkily enjoyable.

My wife loved this program, as did Bill Crider. I'll have to track down this soundtrack.