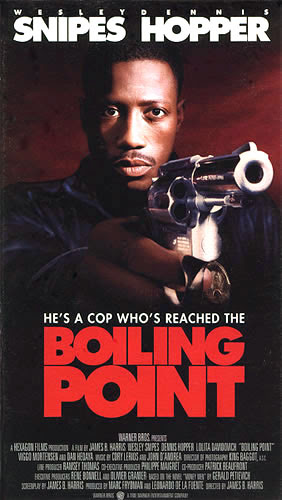 Tag line: He’s a Cop that has reached the… Boling Point

The boiling point of lead is 2022 K and the boiling point of Treasury agent Jimmy Mercer is the murder of one of the agents on his team. The box art for my VHS copy of this film we see Wesley Snipes with his Smith and Wesson Model 13 .357 Magnum pointed outward, his badge barely visible below the pistol. The image is very telling. It’s an outdated duty weapon (or thought to be) from an outdated era of Law Enforcement, or I should say the dregs of the era, as the torch was being passed from the Greatest Generation to their children and the madness of the 80s and 90s.

This is a noir via the James Ellroy explanation of Noir as being ‘Your Fucked!’. The criminals are going to get caught, but so are the treasury agents who after a buy goes wrong find themselves with just 24 hours to catch the killers. In many ways it’s a throwback and a different era of crime film.

The film stars a very miscast Wesley Snipes who can’t seem to pull off the world weary at the end of his rope treasury agent. It’s not that Snipes is bad in the film, just that the role really calls for someone more gritty more worn out.

On the other hand the late Dennis Hopper is perfect as the recently released old school con man with big plans and big ideas. He’s a man out of time a man who has been passed by and who has at least a idea of what is right and wrong. Stealing the film is Viggo Mortensen, playing a psycho thug, the new breed.

The film unfolds as Red and Mercer are set on a path to collide. Along the way the film drags a bit in the middle and there is a muddled sub plot or two that get a little more screen time then they should. Over all it is a solid B Crime film with a couple of great moments, including a final shot that is one of the most pure noir moments in film during the 90s.