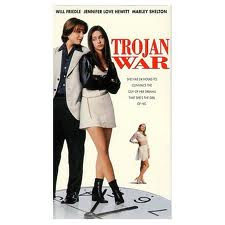 The Trojan War has a simple premise, a high schooler Brad is asked by the girl he has lusted after for years to tutor her, and then she ends up wanting to have sex with him. There is only one problem he lacks a condom. Brad heads out into the night to find a condom and ends up having a series of largely wacky adventures. Along the way Brad figures out that his best gal pal from all these years might just be the one that he should be with.

Sounds like a pretty simple idea, and as with any set up like this, it’s all in the execution and the cast. Boy Meet’s World’s Will Friedle plays Brad,Jennifer Love Hewitt plays his best friend Leah, andMarley Shelton is Brooke the object of

his crush. I want to take a moment to talk about Friedle, who has a very likable screen presence, and I am not sure why he wasn’t cast in more films during this time period or since. Marley Shelton has made interesting career choices appearing in Planet Terror and Women in Trouble in the last couple of year. I don’t think I need to say anything aboutJennifer Love Hewitt, other than I just want to mention that she was also in the teen romcom, Can’t Hardly Wait around the same time, which is also worth a look.

Obviously the title is a reference to Trojan Condoms, but there is also the aspect of the series of adventures that Brad has to make his way though to get back to the Brooke. There was a spate of teen films at the time that were based on classic literature. Ten Things I Hate about You and Clueless both have roots in the classics.

It’s a fun, fast, and little teen comedy of the variety that they don’t seem to have an interest in making any longer. It's also worth noting that the director George Huang was also the director of Swimming with Sharks , a cracked black comedy about Hollywood.