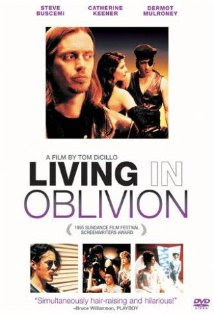 Looking back almost 20 years it’s strange to see how far we have come. Once upon a time there were a lot of up and coming actors and film markers who toiled in the indie film world. Some made it and some didn’t but I can’t imagine that there were many who didn’t leave some part of themselves on the films they made

Living in Oblivion, made in 1994 just on the up tick of indie film, is a simple story that plays with the limitations of indie film making by setting it’s action on the set of a low budget production. Anxiety on the set and Anxiety Dreams fill out the three acts in which the story is told. Nick is a director who is making some kind of film, the exact nature of which we never learn, other than it involves an actress named Nicole as she plays out a scene with her mother, a scene with a man she supposed to be in love with and a scene in which she has a dream. Damien is the character that is opposite her in the middle section, Played by James LaGros (Phantasm II) is your typical womanizing Hollywood type who in the course of the film is tags as a Hostess Twinkie.

I don’t want to get into too much of the specifics of the film, because it is one of those gems of the 90s that really is worth checking out for anyone who recalls the era or has an interest in the wave of indie films from the time. I will just say that I noted that the scene in each of the three sections is scene 6, that it was a kick to see a young; Steve Buscemi, Catherine Keener, Dermot Mulroney, James LeGros, Peter Dinklage and Kevin Corrigan. 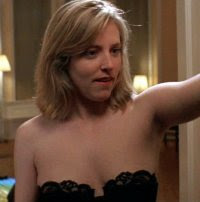 I wonder what happened to Danielle von Zerneck (also in one of my fave 80s beach films, Under the Boardwalk, which I am shocked hasn’t popped up in a Millcreek DVD set as of yet)? There is something about her that I find an appealing screen presence. It’s not that she is a It girl, she is attractive, but not supermodel attractive. What I like about her on screen is that she comes off like the girl next-door type, and this seems to be the last film of note that she was in.

Whatever (see I still recall the great slang of 90s youth), it’s a solid indie that understands the world in which it was created, and explores the magic of film as well as the hell making film. It’s a film that is well worth checking out for anyone that recalls the era or is interested in a view of indie film making of that time.

Well, I still miss Deborah Foreman similarly...and my '80s flick from this week, THE BIG TOWN, is another that had a cast that would've cost $50 million by themselves in five to ten years after the film was released...

Certainly she`s the kind of girl you would want to be around and she was wonderful in it, really upbeat and funny.