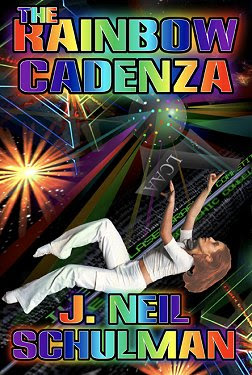 I first discovered The Rainbow Cadenza in college when I was looking for something else. I had discovered an paper on fascist libertarian utopias in fiction which mentioned the book. I was interested in the subject and set about tracking down and reading as many of the books cited in the paper as I could. I don't recall how many I managed to find and read, most of them left no impression in my brain, but The Rainbow Cadenza did.
From Wiki:
The novel portrays a future nominally-libertarian world government, in which women, greatly outnumbered by men, are required to perform a three-year term of sexual servitude, and the "Touchables" underclass can be hunted for sport; but where many social taboos of the middle-twentieth century have been eliminated—for instance, gay marriage, drug use, sex work, Wicca, are all deemed socially acceptable.
What I recall most about the book is two things. The struggle of our hero,

Joan Darris who is stuck between her art, her duty to the state and escaping to a radical free colony known as St. Clives where there is no forced duty. Secondly the depiction of male sexuality in the book delves into the varied desires of men. Some men just want to have sex, while others are looking for a emotional, spiritual or social connection in as much or more than just a sexual experience.

Like so much of the best Sci Fi the book was dealing with culture, life styles, and the freedom of the individual. It has been many years since I read the book, and I think my copy went in the great purge of 2002, but it's one that I think is worth revisiting. It appears it is currently out of print, but used copies are out there and of course an E-book version.

Another new name. Weird sounding, for sure!