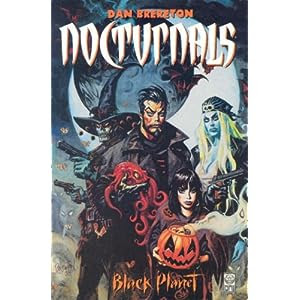 I'm running late with this one, but it's halloween weekend and I had to go with some kinda horror pulp thing and that brought me back to Dan Brereton's The Nocturnals:
I discovered The Nocturnals during my final year at Michigan State University back in 1995/ 1996. I was shopping at a local pop culture shop and just getting back into reading comic books. The two comics books that really impressed me at the time were Astro City and The Nocturnals.
The Nocturnals from wiki:

Nocturnals is a comic book title created by artist Dan Brereton which debuted as a six-part limited series in1994-1995 under Malibu Comics collectively subtitled as Black Planet.

It follows the supernatural exploits of Doc Horror and his daughter Eve in Pacific City, a fictional California town which seems to have more than its fair share of paranormal activity.

Black Planet is an inspired mix of horror and pulp, it could have easily been featured in Weird Tales or any of the other shudder pulps of the mid 1990s. The art work is amazing and worth the price of the book alone. Later Nocturnals stories are not as pulpy, but well worth checking out. You can find The Nocturnals and Dan Brereton on the web HERE.

New to me but looks good.