The End of Everything by Megan Abbott 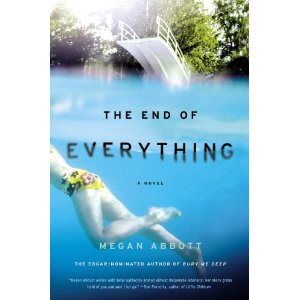 Like Megan Abbott I grew up in Southeast Michigan during the 70s and 80s, we lived in the wake of the Oakland County Child Murders, and the disappearance of Adam Walsh. There were very bad things happening to young people, stranger danger, the crack wars, and then there were people who were doing bad things to kids at school, in day care and of course in Church. In The End of Everything, Abbott explores the all too common threat to young Generation X teenage girls of the early 80s, the sexual predator.
The novel follows Lizzie, a 13-year-old girl about to enter high school. She plays soccer and is learning field hockey, she spend her time with her best friend Evie and her older sister. Evie disappears after school one day after refusing a ride with Lizzy and her mom. In the hours following it becomes clear that Lizzy isn’t anywhere to be found, and in come the police.  As things move on Lizzie finds that she holds clues and some answers about what has happened and why, and just maybe she is going to start putting together some answers to what is going on in her neighborhood.
Abbott drives the story forward in a whispered running pace.  It’s like she is tell you a gossipy secret in the lunchroom. She accesses the confusion, uncertainty, and the emerging truths of becoming an adult, in a way that is honest and very real. Set right at the end of the school year as the spring is making way for summer, the book also manages to bring in a humid sticky feel that isn’t sexual, but more dream like and buzzing with a realization that just hasn’t been put together.  While the time and place of the story is never spelled out I have a strong feeling that it is the
This is another winner from Abbott, who is blazing her own path through the world of crime fiction. She consistently seems to write what she wants; never pandering to what the market seems to be selling. I don’t expect for her to give us another series detective, or some sort of tough anti-hero vigilante character.  Simply I think she stands along side; Victor Gischler, Duane Swierczynski, Jason Starr and Christa Faust as thee cutting edge voice of crime fiction today….. which is to say that I do highly recommend The End of Everything, it’s a book that I know I am going to revisit.
Posted by Iren at 1:53 AM

All I can say is I was all smiles in the beginning, then ricocheted into a tale that had my heart pounding and didn't let up! I loved it!