As I teased last week, my Forgotten Friday book this week is....  The Last Days of Disco: With Cocktails at Pelrossian Afterwards by Whit Stillman. 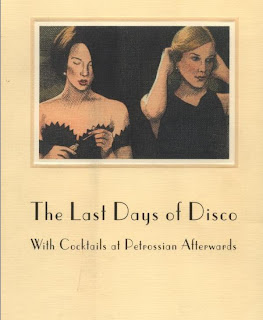 I am hesitant to call the book a full blown novelization, because while it tells much of the story that the film did, the book adds to and deepens the story told in the Last Days of  Disco. I have no wish to deride novelizations, after all there is a market for them, they provide paychecks for writers and they can serve as a portable way for someone to take a film with them.  That said this really isn't a novelazation, sure it follows the plot of the film, rehashes it really, but from the get go the novel establishes that 1) the movie was made 2) that the novel is written by one of the characters from the film 3) that the novel is there to set the record straight and tell the real story about what happened.

The Last Days of Disco is the story of a group of young professionals entering the work world in early 80s New York City. As a group they have a history from their college years where they were friends or acquaintances and sometimes rivals. This history and the events that shaped it are still playing out as the characters find their feet in the work world and engaging in what is referred to it the text as ‘Vicious pairing off”. The center of the action takes place at a Disco simple referred to as The Club, a thinly veiled version of Studio 54.

There is a meta-thing going on with the book, but it never get's out of hand. The book also allows Stillman to fill out details about the characters life after the events of the film, and as Stillman wrote the screenplay he is in a unique position to fill out details that a hour and a half of screen time doesn’t allow.

At any rate, if you are looking for something a little lighter, and if you watch my monthly reading lists you know that I need a break from the bleak more than once and a while, you could do a lot worse than this little forgotten gem. 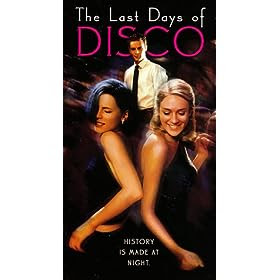 Oh, Oh, Oh, and because this is a multi media book, I do have to recommend the film as well. I was lucky enough to see it in the Theater during it's limited run, and even though I hate Disco music with a passion reserved for cooperate criminals, vile vice-presidents (the more former the better, don't get me started on that one.... I'm looking at you LBJ) and Hippie-critical yuppie scum, the music and the whole facade of Disco music didn't bother me in this film.... mostly because it's shown as a vacuous self absorbed highly marketed over produced product that was sold to the masses... which come to think of it is partly reflected in the choices, attitudes and lives of the characters in the film.

Of course Mr. Stillman has a website which you can check out at:

It was a good film although, like all of stillmans films, hard to love. What happened to him?

Chloe is in her prime on Big Love. I need to see this again.

Thanks for stopping by everyone...

Paul: funny I never found Stillman's films hard to love, maybe it's his view of relationships as one person selling themselves to another.... or that he just resonates with me. As for where he's been, it sounds like development hell, working an adaption of a Christopher Buckley book, an unfinished film and another in devlopmment

Patti: I need to catch up with big love, and I have to say that I really disliked Chloe in Kids, but she has been very interesting in a number of films.... in addition to Last Days of Disco, I really liked her In Trees Lounge